Adding, ‘We don’t simply invite any man, he must fully understand the Cuckold scene. All our sexual entertainment takes place at home and bulls are extra special guests. They are free to decide when and how often sex will occur. It's an unwritten rule that my wife and I must never deny his demands. I watch, photograph or video practically every bit of sexual action until sleeping. Our bulls always spend the night in bed with my wife. I sleep in an adjoining single room. From there, I'm able to hear every moment of their goodnight or early morning sex. Once alone, a bull may fuck my wife with added ferocity. She relishes each bull occasion as a bride on her wedding night. When the bull leaves it's my turn to climb between her legs. His sperm still oozing from her pussy as she describes the joy of his huge cock, it's he most incredible sex imaginable.

As opposed to physical presence, many Cuckolds prefer live images or photographic evidence of their wife's indulgence. To witness the crotch of a wife's soaked panties before she exposes her spunk oozing pussy is arousal of the highest order. Of course, there are others who live the Cuckold lifestyle to its extreme. Part of a strict regime where anything is possible, husbands become willing slaves. Chastity equipment and dressing in female underwear is prevalent. An orgasm is a privilege that these Cuckold's must earn. Licking clean orgasm juices from both his wife and her bull  may earn him one. Humiliation, such as inadequate cock ridicule brings added arousal to more extreme Cuckolds.

Although in far less numbers, females, (Cuckqueans)  too thrive in a role reversal of male Cuckolds.  Significantly, Gina, one such lady revealed, ‘If my husband was unfaithful behind my back I'd never forgive him, but to watch him undress, caress and share orgasms with another woman is sensual beyond words. He seems revitalized, and I become so wanton that I orgasm at his merest touch.’ 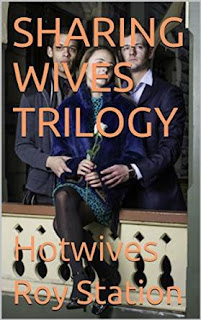 Books available at Amazon and Smashwords
https://geni.us/mKSY
https://www.smashwords.com/profile/view/RoyStation/
at March 14, 2022 No comments:

Arriving at the venue cars will park spaciously; which not only enables participants to weigh up the scene, it also ensures easy access to those containing females. There is no announcement or klaxon to signal that proceedings are underway. Females are almost always accompanied by males, and the action will begin when they start making out. It is not long before lust takes over and the cars windows/doors or both begin to open. This indicates, to those present, that they are now receiving guests. Males, erection in hand, will appear as if by magic at this point and approach the cars. Males, who brought female partners along, may feel that their job is done and place their women, literally, into the hands of the doggers. They may then watch or become part of the queue at another car; whatever they decide, they are certain to have plenty to talk about later.

These women are truly appreciated by male doggers, who are well aware that they indulge purely for pleasure; they are not prostitutes who charge. At the end of an evening, most women will receive a round of applause. This does not mean that the women are not appreciative; where else could they experience the pleasure of so many cocks in one night? In car parks, when a women remains in a car it means that she is extracting enough pleasure from being groped and tending to cocks. However, when a woman steps outside, it means that she wants to be fucked, which at Dogging events, means nothing less than being gang banged. Such fucking is almost always pre-planned by the women and their partners. If a woman decides that she wants a random fuck, she will simply invite one of the men into the car. It is hoped that the anticipation and arousal from being fingered and groped will be enough to prepare her for such a prolonged fuck.

Julie, an experienced dogger revealed: “Once I am ready I will blatantly lay face down on the bonnet of the car.” It signals that she is ready to take on all comers; wearing a condom is the only requirement. “The first male to approach will have the honour of raising my skirt and completely removing my knickers, my husband loves watching that. I will be fucked in that same position, without seeing a face, by every male who cares to step forward.” No one is turned away, which means that as many as twenty cocks may pound her. Tumultuous applause, all aimed at the female, always follows such acts of endurance. 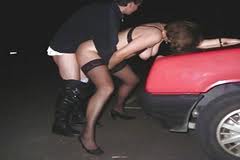 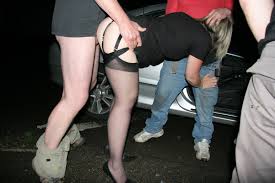