A compatible bed partner is key to avoiding a life of sexual disappointment and frustration. Romping away until your hearts content is far easier without distractions. A relationship can be doomed, all too easily, by a trivial clash of personality or mixing business with pleasure.


It spells disaster when a couple take their argument to bed and fall asleep before resolving it. If only half of a partnership turns their back in bed, it may be the start of a promising situation. However, when a full partnership turns its back, it can't possibly see eye to eye. Underwear will not be removed and the future promises the introduction of bed-socks.

To avoid this-Take turns in admitting you were wrong, and offering oral sex is an advisable means of apology. 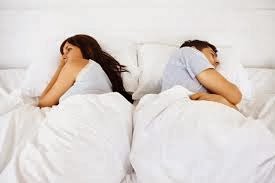 I'll Take Care of the Boss.


Under no circumstances, should a partner attempt to improve a partners work prospects by becoming sexually available to a boss or bosses.Such assistance is blatantly obvious and may be taken advantage of. Imagine  the horror of a partner thinking talent has earned their promotion, only to discover it was a naked hotel rendezvous. Such pain would never ease. Sex-life doomed to the past.

To avoid this-Tell partners that bosses are rubbish at sex and volunteering to wash their car or mow their lawn is a far better route to promotion. 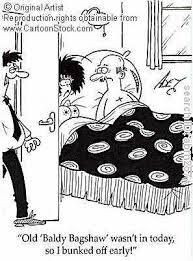 
Always think twice before parking in bed with any sort of traffic controller. They have a frustration fetish and indulge by making parts of their body no go areas. To be told erogenous zones are restricted areas is not compatible to saucy proceedings. Expect long delays before reaching any orgasmic destination.
To avoid this-place a red light in the bedroom; it will excite any traffic controller. Then reveal, it indicates a lady of the night and not a stop sign. Prostitute and client role play will swiftly follow.

To avoid this-Choose a partner wisely, and above all else, make sure they fuck like the clappers. Intimate Questions for a Captive Audience of Men. (Women should Peek.)


Many men work away from home in an environment that makes socialising impossible. Consequently, they have to endure long hours with workmates. So just what do they find to discuss? You may be surprised to discover that many enjoy playing out embarrassing or intimate situations and morals. They do this by answering pre-written questions; so, I thought I would expose these secrets by displaying 30 very similar questions.

·         How would you react to an unknown woman who flirtatiously nipped your bottom in a public bar?

·         What’s the first physical attraction that draws you towards a woman?

·         If you were about to have sex with a woman and she said something very distasteful about your best male friend, would you still go through with the act?

·         Would you take a woman home to meet your parents, if she swore like a trooper, and had no control over it?

·         If you girlfriend of a few months, who wore very short skirts, suddenly said she wanted to go commando as it made her feel more comfortable, would you object?

·         Would you tell the parents of a new girlfriend that you had no car because of drink driving, or would you lie and say you didn’t drive?

·         If you suddenly discovered that a woman you had been dating for two months was married, but in an open relationship, would you walk out?

·         Would you marry a woman, who because of her job, spent three or four nights away from home every week?

·         Do you think that there are certain tasks that only a woman should do, and vice versa?

·         If your new girlfriend admitted she couldn’t cook a meal to save her life, would it be of any great concern to you?

·         If your girlfriend/wife wanted to be photographed in the nude (as a keepsake), while she still had a beautiful body, would you be happy to allow a professional photographer carry out her wishes?

·         If you met a very pretty girl who thought it was fun to break wind, and did so on the first date, would you immediately have nagging doubts about her?

·         Before you married, would you prefer to know every last detail about her previous sex life, or allow it to remain a mystery forever?

·         If there was a way that you could secretly spy on an attractive neighbour while she was bathing, would you take up that option?

·         Do you have a hidden talent in the field of arts that you would secretly love to make a living from?

·         Have you ever seen a ghost or experienced something that was definitely supernatural?

·         Have you ever bumped another vehicle or object without being seen, and not admitted to it?

·         Do you believe any of the people who say that they have been abducted by aliens?

·         Have you ever said that you enjoy an activity, which you secretly despise, simply to impress someone?

·         If you are given too much change in a shop do you immediately hand it back or say nothing? 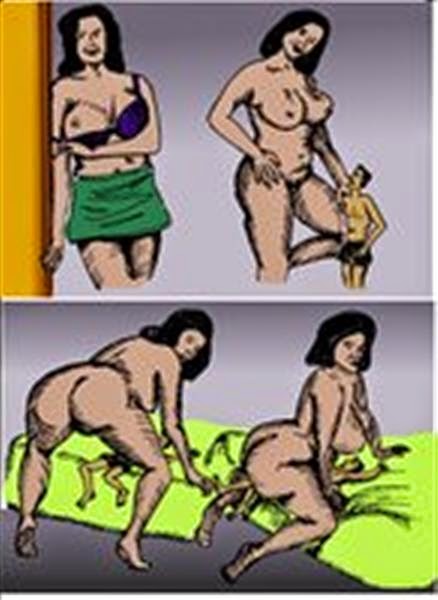 Males, past and present, have always been self-conscious about the size of their penis. Insecurity begins during early teenage life, purely to cause havoc. It's during this time that the penis develops a mind of its own. Without warning, it suddenly becomes uncontrollable. Usually in public, to maximize embarrassment, it will erect itself for no reason whatsoever.  Its departure will require the mind to engage into its most tedious thought. Teenagers will often exit a bus with their erection concealed by a college bag.

Ultimately, discussions within this age group will change dramatically. Toys and games are banished to the loft, they have a new plaything, and it doesn’t come with instructions. Each new member must gather their own information. Shower room debates, regardless of global location, will always reach the same conclusion.
Bigger is Better.

It's a never ending cycle. each male generation, generating insecurities that can last a lifetime. But should the male population continue to suffer such indignities? Is it time to remove this self inflicted doubt? The internet is home to mass information regarding penis size, and much of it concludes, Bigger is Better  to be an error. Compiled evidence insists that, during the course of sex, EVERY penis size has its pros and cons.